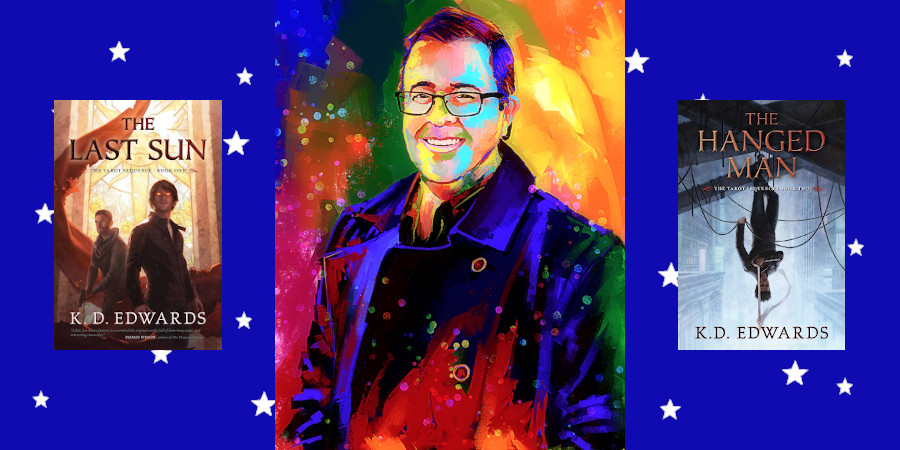 It’s been ages since I did an interview with anybody but I really liked my last series of author interviews (which hasn’t made it onto the new blog – yet) and I am happy to now present to you the first in an entirely new series of interviews! KD Edwards is the author of the queer Urban Fantasy series „The Tarot Sequence“, the first two instalments of which are on my list of best reads in 2019.

First things first, I love your debut Urban Fantasy series The Tarot Sequence! How would you describe it in just three words?

*Not, like, real boys. I mean the American CW TV version of boys, where they’re obviously 29 years old.

The Last Sun was the first installment in your Tarot Sequence series and the second one, The Hanged Man, will be released on December 17th. However, having already read the sequel, I know that it’s not the last one in the series. How many more novels do you have planned? Do you plot well in advance or does the story develop as you write it?

7 more! I planned 9 from the very, very beginning. Writers largely fall into one of two camps (or a mix of either): planners and pantsers. Pantsers write by the seat-of-their-pants, with little outlining. Planners outline religiously. I am an obsessive planner – before I even finished LAST SUN, I had over 300,000 words in notes on future books and storylines. I know what happens in each novel; I know my development arcs; I know the last scene. There’s still a lot that’s up in the air, but I am very, very carefully curating a 9-novel series that fits together well.

Sometimes I get surprised while I’m writing. Rune does something at the end of HANGED MAN which I didn’t expect. Trust me, when you live with these characters in your head, they have agency. And Rune decided he wanted Something Big to happen sooner rather than later. It won’t upset my plans for Novels 3 or 4 at all, though—if anything, it’ll make TAROT 3 even more interesting to write.

There’s a lot of really cool stuff going on in your novels, but let’s start with the basics: What made you choose (New) Atlantis and how did you come up with the idea to base the Atlantean Houses on tarot cards?

I started with the idea of writing a book set in the modern city of a “lost continent.” Myths around lost continents go backs centuries, and there are more than one of them. I settled on Atlantis, and then wrote a 2-page prolog describing a reinvention of it. Those two pages incorporated the tarot imagery – which I’d always been fascinated with as a source of court or throne archetypes – and…well… Everything flowed from there. The prolog, incidentally, got cut from Book 1! But it will appear in Book 2!

Ultimately, I think Atlantis is interchangeable with any other lost continent story. But the tarot imagery is what really took hold. I can’t imagine not having based my court structures around them. They’re both familiar and alien at the same time, which is a great tool for some of the creepier major arcana, like Lord Hanged Man.

Rune and the other magic users in your novels use so called sigils to work magic – an intriguing magic system. Where did you get your inspiration for this? While reading I often felt like your magic system would work well in an RPG or pen&paper context and some of the mechanics reminded me of games I’ve played.

It is TOTALLY based on RPG, but more so video games. The way sigils work – devices where you can store 1 spell at a time, and that spell could either be single-use, or set on a timer – completely could map to my PS4 controller. Nothing would give me greater pleasure in life than to work with a team on an open-world TAROT RPG.

But in a larger context, the RPG or D&D influence is all about limitations.You don’t play with godlike characters on paper. They start small and level up. They can’t spam the same spell over and over; there are real limitations around use which require creativity and ingenuity. One of the best compliments I received from a reader is that I stayed true to those constraints. When Rune runs out of spells, he’s out. He needs to find a sanctum and store more. Working the mechanics of that limitation into my writing presented some really rewarding scenarios, especially in THE LAST SUN.

Tell us a little more about your characters! Rune, Brand and all the other guys are so different from each other and each of them has their own distinct voice – some of them quite snarky. Do you have a favorite? Is any one of them easier (or harder) to write than the others?

A lot of them are archetypes that have always appeared in my earlier writing. Brand is the smart-ass. Rune is the hapless but powerful main character. Matthias is the vulnerable ward. But….I don’t know. It’s hard to explain. They took on a life of their own, especially the relationship between Rune and Brand. There’s a lot of discussion about toxic masculinity in male fantasy, and I tried pretty hard to subvert those expectations. Especially since Rune and Brand aren’t romantic. They aren’t in a sexual relationship. But I still wanted them to be intimate. Brand thinks nothing about massaging Rune’s shoulder when he knows Rune is hiding an injury. Rune thinks nothing about throwing himself on the sofa next to Brand in a half-embrace or sprawl. And it really, really works for me.

I think the only true surprise in the story was Quinn. I did not see Quinn coming. I have never written a character like him. And in only 3 scenes, he more or less stole my storyline, and forced himself into supporting cast status.

As for favorites? I love writing Brand. Always. He says what I rarely would ever say out loud. But I also love writing Rune, during those moment when something snaps inside him, and he becomes “Lord Sun.” It’s tricky, having an informal character suddenly break into formal “princelike” speech at times…. But I think it works for Rune, especially in the moments when it happens.

One thing I love very much about The Last Sun and The Hanged Man is the casual queerness of the novels. Luckily, there are more and more diverse and #ownvoices sf/f books being published these days. Did you always know you’d write your books like this or was it something you had to put a lot of thought into?

Oh yes. That’s my life goal. To write mainstream novels in the genres I love most, and to fill them with characters that just happen to queer. That means everything to me.

I still have a ways to go, even in Tarot Sequence.I have a ton of gay male characters, but there’s so much else to the queer community. So when HANGED MAN was done, I had a long look at the characters, and really started asking myself who I was writing, and who they would identify as. And it became so apparent that Rune is demisexual. The slow, at time halting, nature of his relationship with Addam completely ties to how slowly he develops trust, which he needs for intimacy. And Quinn is Ace. It’s just so obvious that he’s my Ace character. I want him to be a little bit older before he puts that into words; but all the pieces are there.

I have so much to learn from other members of the community, too, in order to do justice to these concepts.

And one last question: Can you tell us what to expect next? We already know that there will be many more adventures for Rune and Co, starting with The Hanged Man, but beyond that any hints about what’s to come?

So I’m writing 9 novels. They are broken into 3 triologies. The first trilogy focuses on Rune revealing his secrets to the reader – because he can be an unreliable narrator, especially when it comes to what happened when Sun Court fell. The second trilogy will focus on the things being kept from Rune. Who were the people and conspirators that are working against him? And the final trilogy is all endgame.

So, in this context, novel 3 is HUGE. It’s the novel where the secrets that Rune is desperately keeping are fully revealed. What does he know about the night Sun Estate fell? Why did he kill Ashton? What has him so scared?

And the entire plot for novel 3 is also huge. It’s the first time Rune needs to fight on a city-wide scale with city-wide allies.

Quinn has literally named the bad guy for TAROT 3 on at least two occasions.

Thanks again for the interview and good luck with all your writing – I’m certainly looking forward to reading more about Rune’s adventures.

Thank you. It’s an honest pleasure to answer questions from someone who’s read the novel. The questions were really tailored to the story, and challenged me. So I had a lot of fun answering them! Be well, and thanks for the support.

I hope, you all liked the interview! Here are some links for further reading: