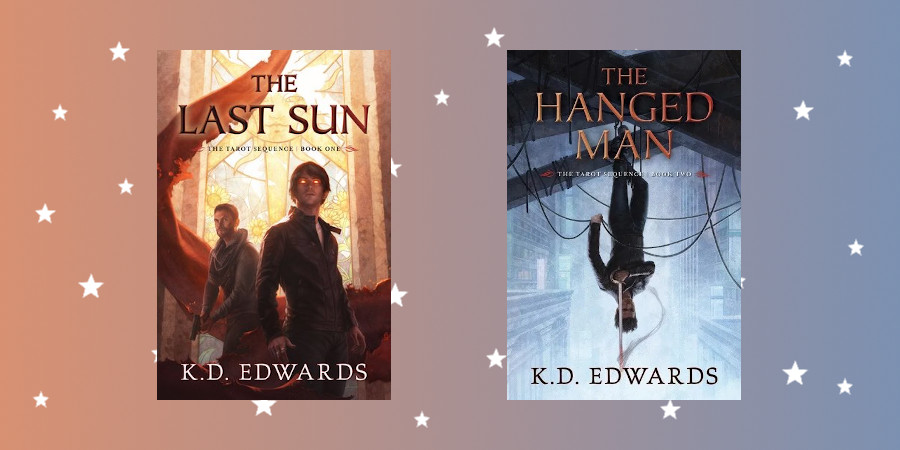 I’ve been meaning to write a raving review about KD Edwards’ “The Last Sun” ever since I read the Urban Fantasy novel last year. Now the sequel “The Hanged Man” is about to be released and I got to read and eARC, so what better time to write this long overdue review than right now?!

Set on the island formerly know as Nantucket, the “Tarot Sequence” series tells the story of Rune Saint John, last member of the Sun Court. After humans destroyed Atlantis, where, unbeknownst to them, a variety of magical beings lived, the Atlanteans settled on Nantucket and turned it into New Atlantis. They are ruled by the Arcana, the magical courts of Atlantis, named after Tarot cards, and Rune’s family used to be one of them. But the Sun Court has fallen, and Rune is the last survivor. This leaves him with a somewhat precarious social standing: He is the de facto Lord Sun, after all there are no other members of his House, but he hasn’t claimed his father’s seat on the Arcanum, the ruling body of New Atlantis, yet, doesn’t have Court of his own and lacks the political, magical and, most of all, financial resources of other Arcana. Now he and his best friend and companion Brand work odd jobs to make ends meet. Their newest one: Finding the lost heir of another Court, Lady Judgement’s son Addam.

The adventure that follows is filled with action and hilarity, but also plenty of more serious and darker moments. Most of all though it features an amazing array of characters and I loved each one of them. Over the course of his story Rune draws more and more people into his orbit (often quite against his will) and each one of them has a unique voice, a compelling story and complex character. The guys are a pretty diverse bunch and there’s a lot of queerness all around. At first glance some of the characters seem like just another iteration of well-known stereotypes: the though, foul-mouthed macho, the soft-spoken, mild-mannered knight in shining armor … But luckily these characters are so much more than the same old clichés. And, best of all, they have relationships that are so much more. There is some romance in here, but most of all there’s friendship and family and I loved how these entirely platonic relationships were portrayed as just as deep and valid as any romantic connection. My only critique regarding the characters: They are almost all men. There are almost none recurring female characters (mostly Rune’s housekeeper) and their roles are really minor ones. There’s some serious room for improvement here.

Apart from that however, I loved “The Last Sun”. It features a fascinating magic system, that reminded me of RPGs and pen&paper games and the worldbuilding is pretty amazing. New Atlantis is a city made up of human building that were relocated there via magic. Most of them have tragic or otherwise impressive histories, that left the places with some kind of magical energy residue the Atlanteans can tap into. And the Atlanteans themselves are a really mixed bunch – almost any mythological, magical creature you can think of are a part of this society.

And to get back to the story itself: I was captivated by everything that happened, from the first page to the last. There is a lot of darker stuff in “The Last Sun”, both happening during the plot and the past, especially Rune’s and some things are rather graphic (CW: rape). But I felt that these things were handled really well – they have consequences, not just immediate ones, but also long-lasting psychological effects. And most of the novel is really amazing, entertaining and downright hilarious, without distracting from the serious undertones. The banter between Rune and Brand especially made me laugh out loud every now and then. Add to that an action filled plot and so many things happening that it’s almost impossible to keep track of everything – but just almost – and you get a book that’s almost impossible to put down and only gets better with every reread.

*Spoilers for “The Last Sun”*

Luckily, the sequel “The Hanged Man” is just as amazing as the first book in the series. While the first novel was already pretty intense, the sequel takes everything up a notch. It’s darker than “The Last Sun” (CW rape, child abuse, torture, violent deaths, kinda gross magic), the worldbuilding becomes more and more fascinating and, joy!, there are some amazing new characters, some of which are actually not white males. If “The Last Sun” was where readers got to know the characters and world of the “Tarot Sequence”, “The Hanged Man” is where the story really kicks off.

Max, Rune’s ward and former member of the Lovers Court, had been entered into a marriage contract to the Hanged Man by his grandmother Lady Lovers and now the cruel Arcanum has come to collect what’s his. Luckily for Max he is now under the protection of the Sun Throne and while Rune’s social standing is not much less precarious than it was in “The Last Sun”, he will do anything to protect those who have become a part of his family. Rune and Brand will have to use every shred of magic and every and every ounce of combat training at their disposal to save Max. Luckily, they also have Addam, Scion of the Justice Court and Rune’s boyfriend, and Quinn, Addam’s prophetic younger brother and Max’s best friend on their side.

Once more, “The Hanged Man” is a story filled with action but also emotion and I loved it. The characters and their relationships just grow more and more complex and amazing and despite there being almost only male characters there is no toxic masculinity in sight. The heartfelt and intense relationships between couples as well as friends are lovely to read about as is the way these guys openly deal with emotions. And I loved the new additions to Rune’s circle and can’t wait to read more about them and am really glad that there are now some more prominent female characters.

I read “The Hanged Man” in one sitting and can’t wait to do a complete reread of both books as soon as the print of this one arrives. It made me feel all the emotions, from laughing out loud at the witty banter and Brand’s remarks, going aww at reading about the romance (and I rarely like romance) to being shocked and horrified by the horrible things some of the people in this world, just as in our world, are capable of. Yes, I loved this, I loved this a lot and even more than “The Last Sun” and I can’t wait to read more about Rune & Co.