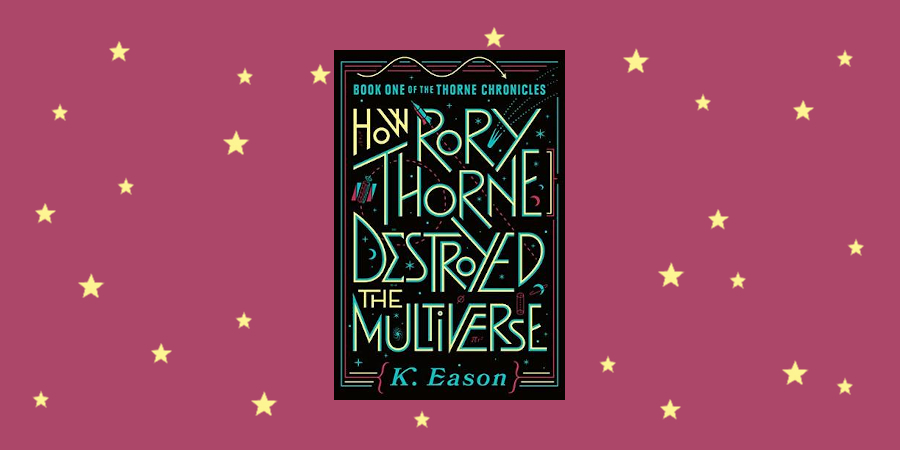 When Rory Thorne is born, traditions clash: She is the firstborn Thorne of her generation, so of course she has to be named after her legendary forefather. But she is also the first daughter born to the Thorne family in ten generations, so maybe they should name her Thalia instead, after the slumbering princess that first, heroic Rory Thorne saved. But no, she will be Rory, that name works just as well for a girl as it does for a boy. However, as she is a princess and not a prince, there are some traditions to be observed, that everybody has all but forgotten – there hadn’t been a Naming Ceremony for two hundred years, after all. Luckily though, the king has a very capable vizier and so the appropriate number of fairies is invited to the princess’s Naming Ceremony: thirteen, not twelve. Not that anybody actually believes in fairies anymore, but there are traditions to observe after all!

“How Rory Thorne Destroyed the Multiverse” by K. Eason is a space opera with a few classical fairy tale elements and a lot of science fantasy fun. While loosely based on the tale of Sleeping Beauty, there is not that much actual fairy tale stuff in this, at least not once Rory’s Naming Ceremony is over. Instead it’s fairy tale tropes that pop up all over the story: There are princes and princesses, there is a fascinating kind of magic, there are, of course, the fairies and their dubious blessings, and let’s not forget the wise vizier. Well, as those who follow my blog or social media accounts know, I’m a sucker for all things princess, even more so if these princesses live in space.

And I certainly liked this space princess story. “How Rory Thorne Destroyed the Multiverse” has a pretty great princess main character, but I especially loved the minor characters that surround her, especially the vizier and her maid/bodyguard. And, of course, the narrator! This novel has a distinct narrative voice, a historian who is recreating this adventure, telling us all about Rory’s life, and giving us glimpses into the lives of her friends and enemies. I loved this, the way it switched between a third person pov and the omniscient perspective of the narrator. All these characters, the narrator included, add so much to this story – there are a lot of fun elements, but also some personal drama and a bit of action.

I also really liked the antagonist. Not as a person, but the way his character was constructed and how his mastery of bureaucracy was his greatest weapon – those were entertaining to read and well written. While I said before that there is some action in this novel, it’s not really all that much. The plot is rather slow building and focusses far more on political intrigue than action. Personally, I really like political scifi novels and I liked this one. The politics were nicely done but not overly complex (maybe even a bit too simple?) and worked really well with the comedy of manners / fairy tale trope parody elements.

All in all, “How Rory Thorne Destroyed the Multiverse” von K. Eason was fun and entertaining, a space opera, that focused far more on political maneuvering than action – which I really liked – and even though the fairy tale parody elements were sometimes a bit too much, I loved the ideas and the characters they resulted in. Honestly, the only element I’m really not sure about was the ending, which is a shame. Not sure yet whether this is reread material, but it is definitely worth a recommendation!

2 thoughts on “Fairy Tale Fun in Space: How Rory Thorne Destroyed the Multiverse by K. Eason”