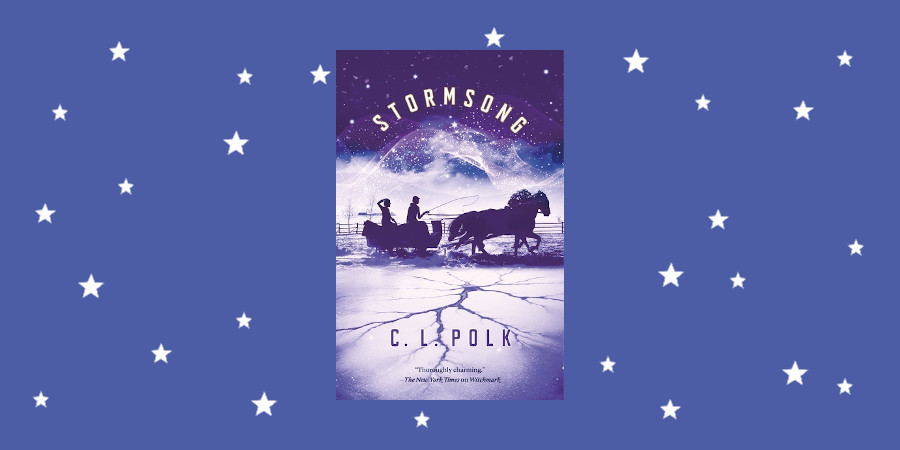 After finishing CL Polk’s first novel, „Witchmark“, I was super excited for its sequel „Stormsong“. The second novel in „The Kingston Cycle“ features a female protagonist, Grace Singer, sister to Miles, whose love story was the centre of the first novel. Now, however, it is Grace’s time to shine and shine she does. I liked „Witchmark“ a lot but I absolutely loved „Stormsong“.

„Witchmark“ was 60 % fluffy mlm romance, 30 % murder mystery and a dash of social criticism. But mainly it was romance and banter between Miles and Tristan and that was totally okay, it was well written and entertaining but the hints of political intrigue and first signs of revolution were what really drew me in and that’s where „Stormsong“ continues the story. Yes, there is romance in this novel as well, but it is far more subtle, slow-burning and not the main focus of the story. I did not mind that at all, because instead this one is all about schemes and trying to save a country while overthrowing the ruling class.

„Stormsong“ has a rather slow start. All the issues that the first novel didn’t really touched on have to be laid out – though the full extent of many political problems Grace has to face doesn’t become obvious until later. But the first novel touched on politics so rarely, there is a lot to introduce before Grace and Ava can dig into the truly extensive political mess faces after what happened in „Witchmark“. I absolutely did not mind the slower start or that the romance was merely a subplot, but then again, I love political fantasy. CL Polk does a great job with this totally different view at Aeland and her descriptions of the political landscape and the story drew my in easily, despite the slow start.

What really makes this one interesting, however, are the characters, especially Grace. She comes from such a place of privilege – she is, after all, not only part of the ruling class but the actual chancellor, a close friend of the throne prince and while she is trying use her privilege to lead Aeland in a new direction, she not only has to overcome her peers but first and foremost must confront her own privilege. This is were Ava comes in, journalist, formerly a peer herself, but fallen from grace due to her social criticism. The two of them work so well together and the slow-burn romance was just the perfect add-on.

This is where I want to touch on something that I already briefly touched upon in my review of „Witchmark“: The audience’s reception of this series. As I said, the first novel was fluffy mlm romance, which, in itself, can be pretty problematic (see this article on Alpakawolken for an in-depth text on the topic), and as soon as it was announced that the sequel would feature a wlw romance people started giving it one star reviews, because apparently not only switching main characters but also the „kind“ of romance the book features is forcing lgbt* stuff on readers and I remember seeing one that said something like wlw is just so much less believable than mlm? A lot of them have vanished (at least the comments) but still, this is sooo problematic! Oh, and btw, the wlw romance in this is #ownvoices, but yeah …

Anyways, I really, really enjoyed „Stormsong“ by CL Polk and am looking forward to „Soulstar“, the trilogy’s conclusion, that will be released next February. Yes, „Stormsong“ and „Witchmark“ are very different from each other but both are great in their own way, though „Stormsong“ is my clear favourite. If you like Edwardian fantasy, political intrigue and revolution with a dash of queer romance, I can wholeheartedly recommend „The Kingston Cycle“ books!