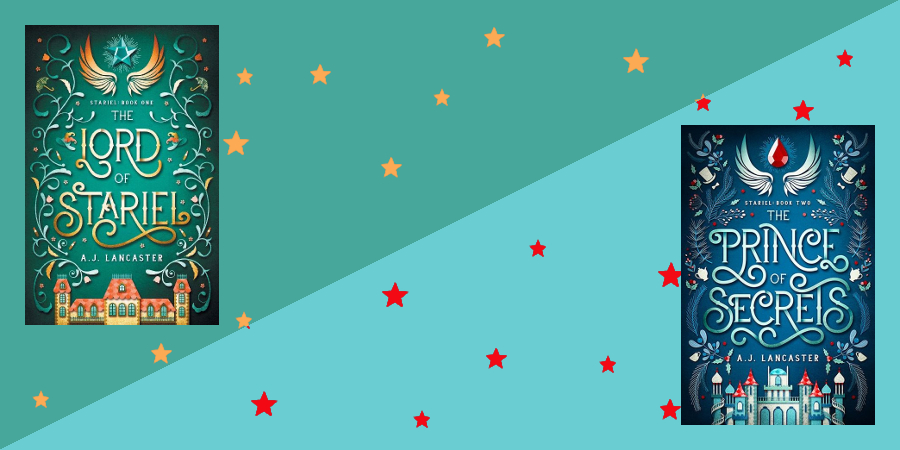 Sooo … I decided to write this review in English because … well, I guess, I just felt like it. The books aren’t available in German, so why not write the review in the same language the books (and my notes!) are in anyway? Here we go!

Home, her land-sense pulsed again. Hetta huffed internally at the sensation. This wasn’t home anymore, magical connection notwithstanding, and she refused to be sentimental about a building.

In a world in which technology and technomancy go hand in hand and theatres employ illusionists, magic is a more or less normal thing. Not so normal however are magical, sentient estates like Stariel, home of the Valstar family.

After six years away Hetta, daughter of the last Lord Valstar, returns North to attend her father’s funeral – and the Choosing ceremony, in which the estate chooses its new lord. Of course, Hetta doesn’t intend to stay and why should she? Her life in the capital is fabulous and she’s sure she won’t be chosen as the new lord – after all her father pretty much raised cousin Jack to become his successor and even if the estate doesn’t choose him, there’s still her older brother Marius.

Only, of course, the story would be over before it every really began if the Choosing went the way everyone thought it would. And then there’s this other little detail nobody expected: Stariel is even more magical than the Valstars thought and there is a strange enemy lurking at the borders.

There are too many secrets at Stariel, she thought grimly as she went to bed that night. Her dreams were fitful things, full of never-ending chase scenes and strange, inhuman creatures.

So, that’s the premise of the Stariel quartet. A world that’s somewhat like ours in the early 20th century – cars and telephones and electricity being the hot new thing, women starting to wear trousers and demanding more rights and independence. All that and magic and fae!

I loved the world building in this. There is no long exposition or in depth explanation of the world, instead you learn little details about it along the way. Since the first novel is told exclusively from Hetta’s POV and she is focused on coming home and confronting her somewhat conservative family, a lot of the things we learn about the world of Stariel and the mindset of its people are about the role of women, the rise of modernity and feminism and things like that.

This also ties in with the one thing I didn’t like about „The Lord of Stariel“: There is a love triangle going on here and it’s just meh. I didn’t like the way Hetta behaved around her love interests, at least in the beginning. She was really weirdly focused on those guys and maybe it’s just because I personally can’t relate, but … yeah, it was weird. Plus it was just a touch too obvious that one of the guys … well, let’s just say, the plot twist there wasn’t really very twisty at all.

I sometimes forget that the rest of the world can take a more serious view of such matters than I do. It has always seemed to me that love cannot be controlled by reason, that we don’t get to choose our attractions.

Luckily, in „The Prince of Secrets“ there is only one love interest and this is where the characters really start to shine. I already loved most of them in the first novel, but they all just got a bit more relatable, more interesting in the sequel. Reading more about them – and from two perspectives, because the story is now told from both Hetta and her love interest’s POV – gave them a lot more depth. Plus there are some amazing new characters in the second novel and seeing them interact was fascinating.

While I would not describe the character cast in the Stariel series as especially diverse, I still want to point out that there is a gay character and others are mentioned (and homophobia is a topic in the first novel) and there are genderfluid and gender… um … switching? periodically changing? Well, there are some discussions about gender and creatures that do not conform to the ideas of gender that are prominent in the mortal world of Stariel in the sequel.

And the thing I really liked was the sibling interaction. It was … pretty good in the first novel and it got so much better in the second one. Mostly because some weird magic siblings where added to the mix. They were … not exactly fun, but super interesting. There are some evil characters in the mix, some good ones and a lot that simply are. They have motives to behave the way they do, some the reader gets to know, some that are hinted at, some that might only become clear in the next novel.

„The Prince of Secrets“ by A.J. Lancaster

„The Lord of Stariel“ and „The Prince of Secrets“ by A.J. Lancaster are the first half of the Stariel quartet, amazing gaslamp fantasy set in a fascinating world with lots of cool magic. What I enjoyed most about the books were the characters and their interactions – there’s a lot of family drama and it’s done really well with every character having their own distinct voice. Even the romance wasn’t bad and it makes up a largish chunk of the story, which I usually hate. So if you like magical history-inspired settings, great character dynamics and a captivating plot that also deals with feminist issues and other important topics, I strongly recommend this to you!

One thought on “Fantasy of manners and family drama: A.J. Lancaster’s Stariel novels”