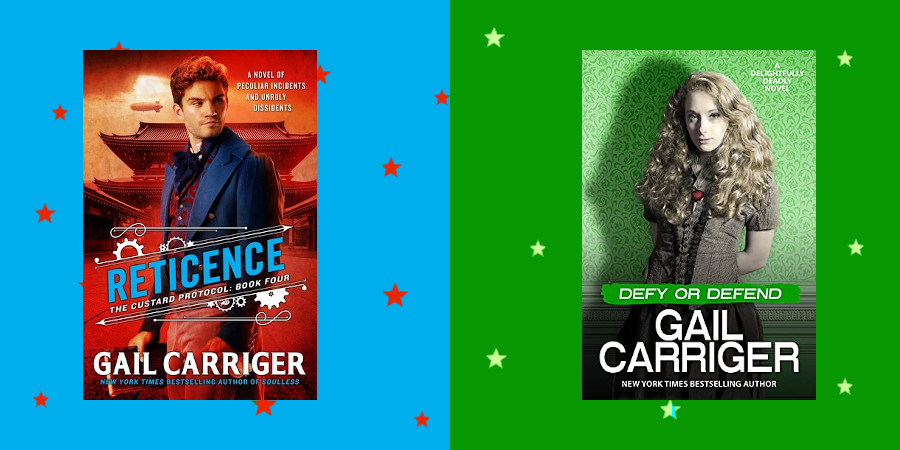 Parasolverse, oh Parasolverse … What should I do about you? Part of me adores the novels by Gail Carriger. Victorian London, vampires and werewolves, dirigibles and kick-ass heroines. Those of you who have read any of my other posts about the Parasolverse, however, know that all parts of this multi-series universe are filled with problems – racism, white-saviour-stuff, uncriticised colonialism, problematic depections of queerness … Yeah, well.

So, because I haven’t been writing any reviews for quite some time now, I decided to just throw the last Parasolverse novel and what should have been one of a handful of additional Parasolverse novellas but is, according to the cover, yet another novel into a combined review. They both have the same kinds of problems, problems I already wrote about in my Parasolverse overview post and the review of „Competence“. I still read these books because part of me still enjoys them and they are easy to read even when I can’t concentrate on more complex stuff. And part of me also enjoyed these two instalments. Still, there are sooo many problems!

Let’s start with „Reticence“, the official end of the Parasolverse. The last novel in a series that spans thirteen novels in three main series plus a handful of novellas with more to come. I did not really like „Competence“, the third book in „The Custard Protocol“ series, because of a whole bunch of things (see my review here) but I was still determined to read „Reticence“ and everything actually started out quite well. Percy was one of my favourite characters in the series anyways and his romance with Arsenic was the most relatable in the series yet. It’s nerdy, it’s not about sex, as basically every other romance in this universe is, and they just sit together and read and discuss whatever scientific topic they both find interesting. Yay!

Apart from that though? Urgs. There was some more of that „we like all people, no matter their gender or sexuality“-stuff I disliked about the previous novel and it felt just as false and forced in this one. I mean, I am all for representation but just because queer characters exist in a work, doesn’t mean their rep is any good and while I liked Amita a lot, this still felt kinda like checking all the boxes on a „how to write diverse fiction“-checklist. And then there’s the whole „entitled British brats traveling across the world and saving whole cultures who just weren’t British (= civilized) enough to do so themselves“ thing. In this one, the group goes to Japan. Well, a version of Japan. A very, very problematic version of Japan. That features in a rather nonsensical plot. Honestly, I’m still not sure what the novel was actually about.

However, my real problem with this novel was that it tried to tie up all the loose ends. And by all I mean not only those from „The Custard Protocol“ series, but also the other two main series in the Parasolverse, „Finishing School“ and „Parasol Protectorate“. So there are lots and lots of characters in this, some of which haven’t been seen for ages, and most of whom where utterly unnecessary for the story and brought exactly nothing to it. All of them, including most of the characters on the Spotted Custard, felt lifeless and flat and the ending didn’t do any of them any favors. Yay, love, but still, that’s really not very much to tie together this centuries and generations spanning epos. And then there was the epilogue, which one made things worse. There have always been a lot of low-key cameos that could only be recognised if you payed close attention to all the little hints, but if the author has to clarify who she was actually writing about in her epilogue after the book has been published … well … Let’s just say, the ending to the Parasolverse was anything but satisfying.

And then there’s „Defy or Defend“ … It is apparently a novel (it says so on the cover, after all) although it is part of the „Delightfully Deadly“ novella series – a series that will tell the stories of all of Sophronia’s classmates from the „Finishing School“ novels. This one is about Dimity, who really doesn’t care for killing but as all her friends ended up in the spy business, she just went along with them. And turned out to become one of the best spies in the War Office? Okay, whatever. Of course there is this one guy she works with and has had a crush on for ages and, obviously, they have to do a mission together. And pose as a married couple. Yeah, cliches abound in this one.

It doesn’t really become better once the plot gets rolling. Dimity and her knight have to keep a vampire hive from „going goth“ and yes, everything in this novel is about fashion and interior design. And that’s basically it. I’m still not quite sure what the actual plot is, besides Dimity and Cris finally talking to each other (because they have both been pining after the other for years). But they redecorate a vampire hive house and give fashion advice – to the depressed vampire queen and a vampire named Justice. Justice is, I suppose, trans? I suppose, because none of the Parasolverse novels use words like trans or gay or lesbian or anything. But Justice, who is introduced as one of the three male vampires in the hive, later starts using she/her pronouns and generally presenting as female. She is one of the major parts of Dimity’s hive make-over project and we only get to know her through Dimity and Cris’s perspectives, who, at some point, states that „Justice that decided that she preferred the feminine“ and that’s that. So yay for casually introducing a genderqueer character, but yeah … This happens about two thirds into the novel and before that Justice is portrayed as the walking, talking cliche of the effeminate, overly theatrical gay guy. Also, Justice’s being genderqueer, while all the characters adapt to her coming-out without batting an eyelash, is kinda shoved into that category of „weird eccentricity you would expect from rich, aristocratic people, who can afford not to care what others think“ along with everything else the vampires do and that’s just not okay.

So yeah … Did I like the newest instalments in the Parasolverse? Meh. I kind of did but I also keep being disappointed but by now that disappointment is something I kind of expect whenever I start a new Parasolverse novel. I still get plenty of enjoyment out of them while reading, but afterwards? Meh. The epilogue to „Reticence“ and the rather forced ties to Gail Carriger’s modern urban fantasy series this apparently establishes were especially meh. Will I still read everything that happens in the Parasolverse? Yes, absolutely. I can’t help myself but I really like these books and I still hope for them to return to the awesomeness the first few novels were – or at least the awesomeness I remember them as?