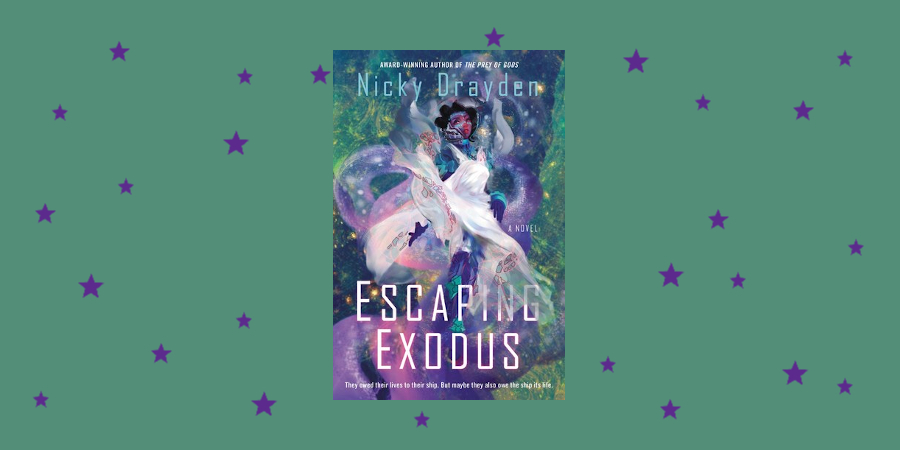 Uhm … That contained rather more tentacles and alien eggs than I was expecting.

I picked up Nicky Drayden’s novel “Escaping Exodus” for three reasons: The stunning cover, the fact that I adore space stuff like living ships, and because #WirLesenFrauen inspired me to add more (B)WoC to my reading list. I also really liked the synopsis and preordered the book pretty much the moment I found it on a SF/F releases 2019 list last year – so well before any reviews had been published. I also didn’t look at the reviews before finally reading the novel. If I had done that, I might have known to expect quite a bit more bio-horror than I did.

However, the book started out pretty damn great and the horror elements weren’t really my problem, they just didn’t help either. “Escaping Exodus” was great for about three quarters of the book. Then it turned weird, the pacing was off, everything happened ridiculously fast, plotlines got lost and the bio-horror, alien tentacle and egg stuff kind of pushed it over the edge from a pretty much botched to simply bad ending.

Again, I really liked the first three quarters of the novel. It is rather slow moving but the whole thing works, mostly because the worldbuilding of the matriarchal society literally carving out a life for themselves inside a giant space faring creature was sooo good! Nicky Drayden touches on a bunch of important issues here, first and foremost classicism and environmentalism and she actually does so really well. But again, the ending ruins much of what the author so carefully built in the early chapters.

Also, the characters are pretty damn bad. The main characters are Seske, the future matriarch, and her best friend Adala, who belongs to a lower class and ends up in the lowest one. That’s basically all I know about them. Their characters, and everyone else’s, were flat and underdeveloped. The on-again, off-again love story between Seske and Adala didn’t help either. Do they actually love each other? Are they just crushing on each other? Do they maybe even hate each other? No clue, but I guess they are supposed to be love. Not a very realistic development, but then again, this mostly happened in the last quarter of the novel. Before that I actually liked how their relationship progressed.

All in all, Nicky Drayden’s “Escaping Exodus” was a scifi novel with sooo much potential. It starts out as this well written, slow-building mystery/fight for survival that touches on so many important issues in innovative ways but the story just deteriorates into a weird mess during the last few chapters. So much happens and I think many of those things could have been great, if they had just been fleshed out a bit more, but other things just don’t work out at all, mostly because whole threads of the story are abruptly cut off and never really lead anywhere. And I can’t decide whether or not I would recommend this …