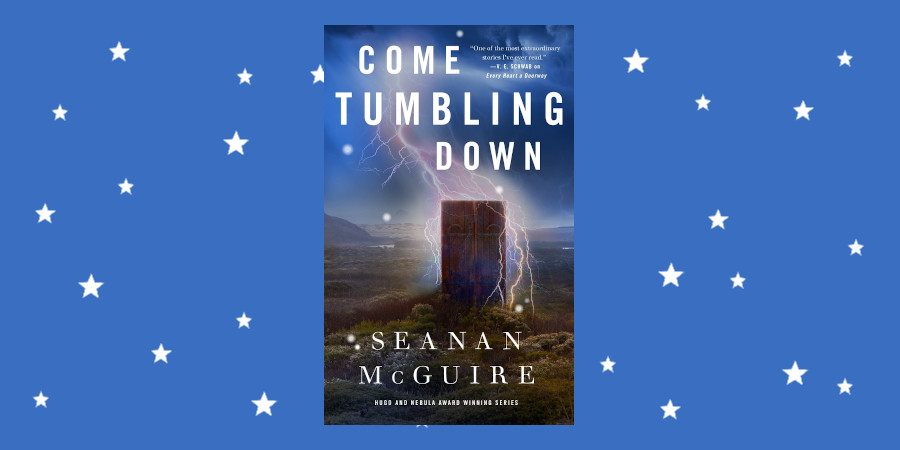 „Come Tumbling Down“ will be released from Tor.com Publishing on January 7th, 2020

Aaaaah, Jack and Jill return! Well, Jack returns, or rather is returned, to Eleanor West’s School for Wayward Children, which means Seanan McGuire continues the pattern of previous Wayward Children Novellas: “Come Tumbling Down” is a direct sequel to “Beneath the Sugar Sky”, while also expanding on Jack and Jill’s personal story. This also means that the school’s rule about quests is about to be broken again as Kade, Sumi, Cora and Christopher set out to help Jack.

Jack is probably my most favourite Wayward Child, although it’s a close call – almost all of them are amazing characters it’s hard to say who I like most. But Jack’s definitely at the top of my list and I was so happy to see that she would come back in another novella. “Down Among the Sticks and Bones”, Jack and Jill’s prequel, was my favourite in the series so far, but now that title belongs to “Come Tumbling Down”.

While the fifth novella starts at Eleanor West’s School for Wayward Children, it soon returns to the Moors, Jack and Jill’s adopted world, where Jack’s former school mates try to help her undo the horrible thing Jill did to her twin, risking not only Jack’s sanity but also the balance of their entire world. And while readers of the series already know the Moors, Kade and Co. visit them for the first time, so we get to experience this world of vampires and mad scientists through their eyes as well as Jack’s.

It also turns out that there is more to the Moors than we saw before: The worldbuilding becomes more complex, as we see the world through the eyes of a far more grown-up Jack than the one who first stumbled into this world in “Down Among the Sticks and Bones”. We learn about the fragile balance that keeps the Moors safe – or as safe as this Frankenstein/Dracula-esque world can ever be – and the risks and responsibilities of the role Jack has grown into. There is also a whole new corner of the Moors, one that holds it very own temptations for one member of the questing group.

In “Come Tumbling Down” Seanan McGuire once again creates a magical adventure that left me breathless and wishing for more. I love how her characters come to life, how they grow more and more through each novella and how the bonds between them develop. And I adore the atmosphere of these novellas. They are phantastical and intense, full of emotion and, especially in this case, often rather dark. But no matter how dark the story is, there is still a lot of humor and love in it.

As always there is a lot of smart stuff in this novella. A lot of observations about humanity, about family, friendship and love. Amazing representation of a bunch of rather queer characters, a fat character, a character with OCD … As those who’ve read the previous novellas know, the characters in these novels are a diverse and very well written bunch. As this is another Moors novella, there are also quite a few old school horror movie-esque elements and aesthetics and I loved it.

This is a great continuation and closure of Jack and Jill’s story and another great adventure for the Wayward Children. “Come Tumbling Down” is now my favourite of the series and I can’t wait to read whatever else Seanan McGuire has in store for this series. I’m excited to see whose Door the next prequel will lead us through and hope to see so much more of Kade and the others. If you like portal fiction but haven’t read Seanan McGuire’s “Wayward Children” yet, be sure to check them out. The novellas might be short, but they only get better and better with each installment and I can wholeheartedly recommend them.