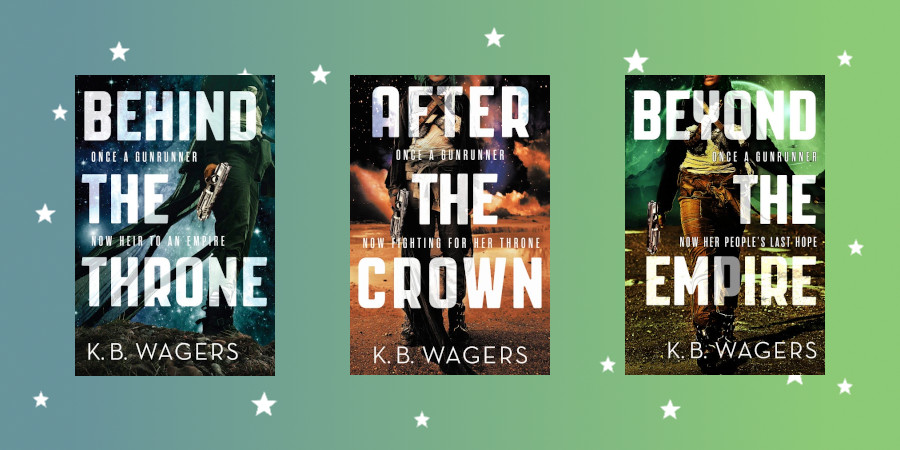 Those of you who followed #RikeRants on Twitter know that I’m a sucker for all things space princess. So when I first stumbled over KB Wagers Indranan War triology, I was immediately fascinated by the idea of a gunrunner turned unwilling empress of an galactic empire. Luckily, unlike the book I ranted about under the hashtag, “Behind the Throne” turned out to be a pretty great book. And the sequels “After the Crown” and “Beyond the Empire” were just as good. And yes, this is a trilogy but only technically, because there already is a follow-up series, „The Farian War“, the second installment of which, „Down Among the Dead“, is being released tomorrow, yay!

Cressen Stone has made a name for herself as one of the best and most ruthless gunrunners in the galaxy. But Cressen is not who she seems to be – she was born Hailimi Mercedes Jaya Bristol, second daughter of the Empress of Indrana, a princess who ran away from home twenty years ago. However, things back home are not as they should be and her sister, the crown princess, sends the empire’s best trackers after Hail to bring her back home. Initially more than a little bit resistant, Hail soon realizes that she has little choice: Not only is her mother seriously ill, her sisters and niece are dead, leaving her the only heir to the throne of Indrana. And if nothing else, she wants to hunt down the people responsible for her family’s deaths.

To my own surprise I realized I actually like novels about political intrigue – I used to think that they were dull and boring but now, as long as they have a nice fantasy or science fiction setting, I enjoy them quite a lot. Which is lucky, as “Behind the Throne” is much more about politics and slowly unravelling intrigues rather than action-heavy, fast-paced space battles or something like that. There is plenty of space action later on in the series, even more so in the follow-up “The Farian War”, but “The Indranan War” does not start out that way.

Instead it tells the story of an unwilling princess who has to unravel a Gordian knot of intrigues at the heart of her palace, a net of plans that is older and wider than anyone expected. That means lots and lots of court politics. But it also means dealing with threats of war, meddling empires and alien races. And while her experience as a gunrunner makes Hail quite an unconventional heir to the throne, it might also give her just what she needs to get revenge for her family and a better future for her empire.

So while there is action in these novels, it’s slow-building and develops over the course of the whole trilogy. As does the complexity of the intrigue, which meant the story got more and more involved with every passing chapter. As I said before, I like slow-building, political stories and I’m glad I do, because otherwise this would not have been my cup of tea. And even so I have to say, that at a few points during the trilogy things got a bit to convoluted even for my taste. But in the end the story achieved a nice mixture of politics and action and the pace picked up quite a bit.

The best thing about “Behind the Throne”, “After the Crown” and “Beyond the Empire”, however, were the characters. Starting with Hail, the gunrunner turned empress, who is this tough, swearing, green-haired woman in her late thirties to her bodyguards and the other people surrounding her. There are a lot of strong people in this, but the great thing is that they all are strong in their own way and that this doesn’t mean that they have no weaknesses. Instead they all have their highs and lows, battle with self-doubt and have to overcome all kinds of obstacles.

There is no great romance plot anywhere in these novels. While some romance is happening, it happens almost exclusively in the background. This doesn’t mean that there are no feelings, though. In fact, I loved the dynamics that develop between Hail and the people that surround her. Instead of being a lone hero who does everything by herself, she builds relationships to the people she meets and is also joined by some old friends. There are a lot of intense feelings, all entirely platonic, but not any less deep than romantic relationships and I loved that. Found family and strong friendships are amazing and I’ll take them over some kind of lukewarm instalove any day.

And one thing I somehow failed to mention entirely so far: the world-building! It’s not the best scifi world-building I’ve read but also, by far, not the worst. And it has some really interesting aspects. First of all, the Empire of Indranan is based on India and its culture is deeply steeped in Hindu tradition. How accurate these depictions are, I do not know. But I like that this is not some ridiculously whitewashed version of space. Also, Indranan is a strictly matriarchal society in which many aspects of today’s society are turned on their head and women, in their need to free themselves from patriarchy, have taken some things rather too far. Equality between genders is one central topic in these novels and in the conflicts Indranan faces.

One note on diversity: As I said before, the characters are not some whitewashed bunch, but parts of different cultures, most of which are clearly based on today’s cultures and their depictions might be rather too stereotypical. Again, as I am not part of any of these cultures (except maybe the Saxony one?), I can’t really say whether these depictions are done well or too cliched. Also, there are some queer characters, some of which are rather important ones, but the novels start out VERY binary. This changes somewhat later on, but I was still quite disappointed about the underlying binary concepts, which aren’t really challenged.

All in all though I thoroughly enjoyed KB Wagers’ “The Indranan War” trilogy. The series does start out slow, with very, very little space/scifi action but picks up its pace rather nicely and also becomes more and more space-y – it even involves some aliens. I loved the characters who, while seeming a bit cookie-cutter-like in the beginning, develop in some really great ways and become more and more complex. The novels are very focused on these developments, of the characters and their relationships, but I also enjoyed the intrigue and mystery going on. Definitely one of my highlights of 2019!

2 thoughts on “From Gunrunner to Space Empress: The Indranan War by KB Wagers”

Behind the Empire (The Indranan War #1)
von KB Wagers

After the Crown (The Indranan War #2)
von KB Wagers

Beyond the Throne (The Indranan War #3)
von KB Wagers

Kategorien: English, Rezensionen
Tags: , After the Crown, Behind the Throne, Beyond the Empire, KB Wagers, Prinzessinnen, Science Fiction, Space Opera, The Indranan War