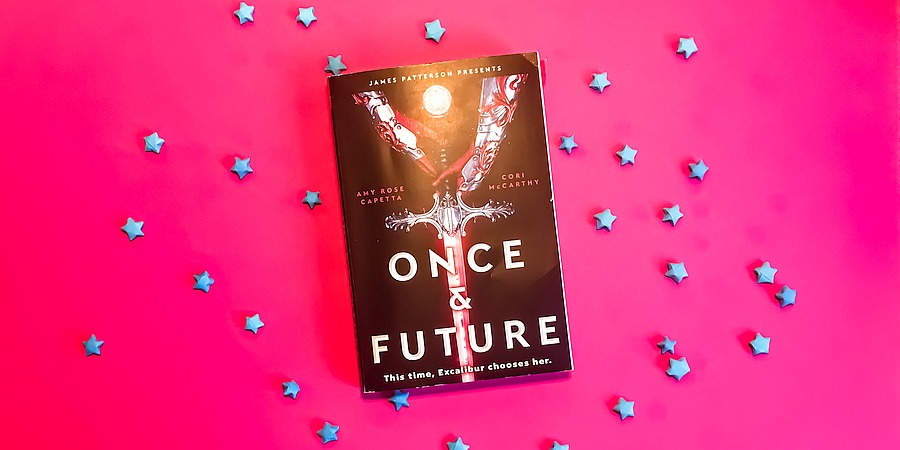 This was … This was not as awesome as it could have been. I mean, it was awesome, kind of, and I’m really looking forward to the sequel, but in parts it was also decidedly not awesome. Yeah, super helpful, I know. So, let’s get into this in greater detail: “Once & Future” by Amy Rose Capetta and Cori McCarthy is a queer scifi take on the legend of King Arthur. Written by two queer authors with promises of diversity, a genderswapped King Arthur, a young Merlin and a bunch of other awesome things, this is, admittedly, totally my kind of novel, even though it’s YA. Unfortunately, it wasn’t quite as amazing as I had hoped for.

The story told in “Once & Future” is that of Ari, the latest incarnation of the mythical King Arthur, and of Merlin, who has been aging backwards ever since his time with the original Arthur. Both of them are caught in a seemingly endless cycle: Arthur being reborn again and again, without memories of previous incarnations while Merlin has to sleep away the decades between all the Arthurs and tries desperately to bring the cycle to an end. Ari is the 42nd Arthur Merlin has mentored and this time things are different: Arthur is no lost little boy who dreams of being a hero, but a rebellious 17-year-old girl on the run from the corporate government that rules the universe. And Merlin has aged so far backwards that he is the same age as his (unwilling) pupil, and this might well be the last chance he has to get everything right. But there are also things that stay the same during each incarnation of the cycle: Morgana, for example, who is decidedly not happy about what Merlin is doing and just wants her brother’s spirit to rest. And, of course, there are always at least some of the knights the original Arthur gathered at his round table. Their names and faces might change, but their essential characteristics never do.

And that is where my problems with “Once & Future” began! Because while Ari and Merlin, as the two main characters from whose pov the story is told, do get enough characterization to feel real. The other people in this story though? Not so much. There are Ari’s brother Kay, their best friends Lam and Val, Ari’s former girlfriend Gwen and her champion Jordan. Together the seven of them are a really diverse group: different sexualities, genders and ethnicities. The problem? Apart from Ari and Merlin most of them don’t have much more than that to set them apart from each other. They are mostly reduced to their diversity features on one side and the roles they have to take in the whole Arthur and his knights thing. Within moments of meeting them, Merlin assigns them their roles and these roles are exclusively defined by the knights’ characteristic behaviour. The big, big problem with that? The combination of these two things, the diversity checklist and the predetermined knightly behaviour, is used for the biggest plot twist.

That Gwen is this cycles incarnation of Queen Guinevere is pretty obvious. However, her trusty knight Jordan is identified by Merlin as Lancelot, the knight Guinevere begins an affaire with, which leads to heartbreak and ultimately Arthur’s death. Looking back at this, I’m not even sure why Merlin identified Jordan as Lancelot, because he was Arthur’s best friend and chief knight and his betrayal of his best friend is just as important as Guinevere’s betrayal of her husband. And while Jordan is the only real knight among the group, she is anything but close to Ari. Yes, she is close to Gwen and I guess Merlin is blinded by his fear that this horrible part of the cycle is about to repeat itself, but, really, Jordan is not the logical Lancelot in this scenario. And, as it turns out in one of the biggest plot twists of the novel, Merlin was indeed wrong about this. The problem here is not that he was wrong – again, him being blinded by his fear and making a rushed choice in tagging Jordan as Lancelot is kind of understandable. The problem is, that all this could have been cleared up way earlier, if he – or Ari – just had just talked to Jordan. Because, surprise, surprise, she is asexual (and possibly aromatic). Yeah. No. Not a cool twist. Using somebody’s sexuality as a plot device is cheap and boring. And it really drives home this feeling that all the diversity is just people checking boxes on a list.

Another problem with “Once & Future” is that it is weirdly inconsistent. Maybe that’s because it’s a collaboration between two authors but the pacing is very erratic, some scenes lack context and the whole thing just seems oddly random at times. This is actually something I only realized on my second read through. After the first one, I just had this feeling of “yeah, okay, I enjoyed that, but something was off”. Well, yeah, a bunch of things, hell, the whole storytelling was off. It’s not horribly bad and you can definitely read and enjoy the novel, but it will feel slightly off. Maybe the most obvious / largest part of this inconsistent storytelling is the tone of the story. At points biting society critic, then emotional drama or fluffy romance and at other points hilarious action, this novel seems a bit like its authors couldn’t really decide on a genre. I’m glad that, while a central plot point, the fluffy romance stuff is not too overwhelming, but it clashes pretty horribly with some of the other directions this tries to take. Political agenda and society critic do not work all that well with fluffiness.

But, nevertheless, I did enjoy “Once & Future” by Amy Rose Capetta and Cori McCarthy. The novel isn’t nearly as awesome as it could have been, if they had somehow managed to make it smoother and more coherent. But it was entertaining and fun for the most part and I loved Merlin and Morgana. The cliffhanger ending promises great things for the sequel and the story captured me just enough that I really want to know how it ends. I really hope, that the characters will get more depth and characterization apart from diversity points and incarnation characteristics, because if they do, they could be amazing. The whole sequel has the potential to be amazing, if it’s just a bit better constructed than this one. Fingers crossed, and all that!

One thought on “Queer Arthurian Legend in Space: Once & Future by Amy Rose Capetta and Cori McCarthy”